John I. Goodlad, our founder 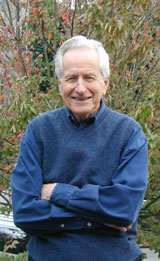 NNER Founder John I. Goodlad was born in Canada and educated there to the Master’s degree level. He received a Ph.D. from the University of Chicago and honorary doctorates from twenty colleges and universities in the United States and Canada. During his life he taught at all grade levels and in a variety of institutions, including a one-room rural school in Canada. He held professorships at Agnes Scott College and Emory University in Georgia, the University of Chicago, and UCLA (where he was dean of the Graduate School of Education from 1967 to 1983) before coming to the University of Washington in 1984.

Goodlad authored more than thirty books on education, including the highly acclaimed A Place Called School (McGraw-Hill, 1984, 2004); Teachers for Our Nation’s Schools (Jossey-Bass, 1990); In Praise of Education (Teachers College Press, 1997); Romances with Schools (2004); Education for Everyone: Agenda for Education in a Democracy, (written with Corinne Mantle-Bromley and Stephen J. Goodlad, 2004); The Teaching Career (co-edited with Timothy J. McMannon, 2004); a 20th anniversary edition of A Place Called School (2004); Romances with Schools: A Life of Education (2004); and Education and the Making of a Democratic People (co-edited with Roger Soder and Bonnie McDaniel, 2008)

Goodlad passed away on November 29, 2014, in Seattle, Washington.

John I. Goodlad, Progressive Educator, Dies at 94, Obituary in the New York Times.

The National Network for Educational Renewal (NNER) leads by example as it strives to improve simultaneously the quality of education for thoughtful participation in a democracy and the quality of the preparation of educators. The NNER works through partnerships among P-12 schools, institutions of higher education, and communities. Four-Part Mission Members of the Network agree on a four-part mission to advance Education in Democracy, which is as follows:

Revised and approved electronically by the NNER Governing Council, February 16, 2007.