John Goodlad, influential educational researcher and teacher whose work over the last sixty years has had a major impact on schools and the education of educators, died on November 29 at his home in Seattle. He was 94.

“John Goodlad offered an alternative vision of what schooling should be,” said David Imig,
“and inspired generations of teachers, principals, academics, politicians, and policy makers to find ways to make good on that vision.” Imig, for thirty years head of the American Association of Colleges for Teacher Education and a long-time-colleague, said that Goodlad “was passionate in his beliefs about the role of schools in a free democratic society.” But coupled with that passion was consideration for his readers and for those he worked with in person. “Goodlad could fill an auditorium with overflow crowds and challenge them to do better for all students. He had the perseverance to shake every congratulatory hand and to engage in conversation with an extraordinary range of adherents, critics, admirers, and detractors, all with civility and respect,” said Imig.

Dr. Goodlad was born in Canada and educated in that country to the level of the master’s degree. He completed his doctorate at the University of Chicago and held twenty honorary doctorates from colleges and universities in the United States and Canada. He taught at all grade levels and in a variety of institutions, including a one-room, eight-grade rural school in Canada. Following professorships and administrative positions at Agnes Scott and Emory University in Georgia, and the University of Chicago, Dr. Goodlad was professor at the University of California at Los Angeles, where he served as dean of the Graduate School of Education for sixteen years.

William Gerberding, former executive vice chancellor at UCLA, and former president of the University of Washington, recalls the impact Dr. Goodlad had at both institutions. With Goodlad’s coming to UCLA, Gerberding said, one could feel “the excitement attached to the arrival of this already well known, even glamorous, young star as dean. I was lucky enough to know and admire him as a colleague.” Under Goodlad’s direction, the UCLA Graduate School of Education became one of the top-ranked schools in the nation.

In 1984, five years after Gerberding became president of the University of Washington, Goodlad also came north. Gerberding recalls that Goodlad “decided to accept an offer from the UW to teach and do research. He had been for many years one of the big names in his field; he added luster to our College of Education and University.” At the UW, Dr. Goodlad created the Center for Educational Renewal to conduct research on teacher education and school renewal. He also created the independent Seattle-based Institute for Educational Inquiry in 1992 to apply research findings to school practice and to conduct educational leadership training programs.

Dr. Goodlad authored, co-authored, or edited over three dozen books. He wrote chapters in more than one hundred other books, and published more than two hundred articles in professional journals and encyclopedias. His work attracted international interest; some of his books have been translated into such languages as Japanese, Chinese, French, Italian, Spanish, and Hebrew.

Dr. Goodlad was perhaps best known for his four-year study of schools, considered by many observers to be “the most extensive on-site examination of U.S. schools ever undertaken.” The study resulted in his 1984 publication, A Place Called School, which received the Outstanding Book of the Year Award from the American Educational Research Association and Distinguished Book of the Year Award from Kappa Delta Pi.

Dr. Goodlad and colleagues subsequently conducted a major five-year study of teacher education, resulting in five books, including Goodlad’s summary volume, Teachers for Our Nation’s Schools, which won the Outstanding Writing Award from the American Association of Colleges for Teacher Education in 1990. Albert Shanker, President of the American Federation of Teachers, called Goodlad’s book “teacher education’s Flexner Report,” in reference to Abraham Flexner’s 1910 ground-breaking report on medical schools. In 1986, Goodlad subsequently created a national network of schools and universities focusing on the simultaneous improvement of schools and teacher education. The network today includes some 27 colleges and universities and 160 school districts.

A substantial portion of Dr. Goodlad’s work was supported by the ExxonMobil Foundation over a 16-year period. Ed Ahnert, retired president of the foundation, noted that Dr. Goodlad “was an intellectual giant, towering over the history, philosophy, and practice of both collegiate and elementary/secondary education for half a century. He had love for his students and colleagues, mastery of his field, the courage to speak truth to power, and integrity. He understood the noble link between education as politics as clearly as 4th Century BCE Greeks and the Enlightenment philosophers. At the same time, he was outraged by the sordid self-interested antics of most education policy makers and empire builders.”

Dr. Goodlad’s research and teaching focused in part on curriculum and the “hows” of school teaching and management. But there was always a deeper issue. Teaching is an ethical act, Dr. Goodlad argued, and a critical part of being ethical is having a good sense of who you are. A colleague, James March at Stanford University, said that Goodlad had for many years been “trying to embrace not education as an instrument of individual or social well-being, but as a testament, temple, and calling. And as much as anyone, Goodlad has taught us to ask whether we know who we are.”

Dr. Goodlad is survived by a daughter, Paula; a son, Stephen, and five grandsons.

Highlights of this edition include:

There will be a pre-symposium on June 25 geared toward Wyoming leaders.

We are Wyoming: A study of Wyoming history, landscape, people, art, and ways of life
UW College of Education faculty members Allen Trent and Pete Moran are visiting elementary schools around the state. They are teaching fourth graders a unit about Wyoming that integrates social studies, visual art, and language arts.

Wyoming Professional Teaching Standards Board joins the Partnership
In October, the Wyoming PTSB board voted to become a Partnership member. We asked Andrea Bryant, executive director, some of her thoughts about the work of the Partnership.

Lost in Transition: Writing and Literature colloquium renewing experience
November 7-8, over forty English teachers from Wyoming high schools, community colleges, and the University of Wyoming gathered to discuss close reading and the connection between reading and writing.

Q. and A. with Margaret Murray, Riverton High School English teacher
At the Lost in Transition: Writing and Literature meeting, we had a chance to meet Margaret Murray, an English teacher at Riverton High School who also teaches concurrent enrollment classes with Central Wyoming College. We asked her a few questions about her experience at the colloquium.

With continued dedication to creating a system of simultaneous renewal through collaboration and partnerships, faculty from Teacher Education have worked for the past two years to develop a number of professional development school (PDS) partnerships.  These collaborations are meant to increase student achievement, improve training of future educators, and create opportunities for professional development of teachers.  The Wright State coordinator for each site is committed to working with the school to provide support, development, and connections to resources, and will assist with collecting data for analyzing student achievement. 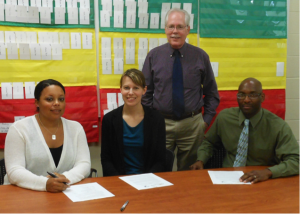 In April of 2013, after much planning and effort from Jack McKnight, assistant director of Partnerships and Field Experiences, and many others, WSUNER held its first partnership conference.  Representatives from 10 local partnership school districts attended the conference and gave presentations on research and best practices in their districts.  The conference was an excellent opportunity for Wright State faculty and staff to interact and engage with the teachers and administrators from the partnership school districts, and for conference attendees to learn from each other.  Planning is already underway for the 2014 conference. 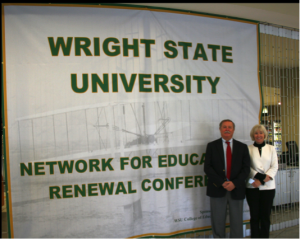 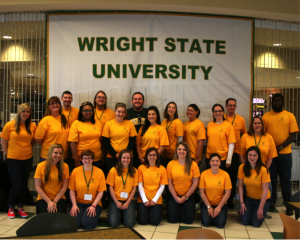 Student and staff volunteers at the WSUNER conference.

This year’s the conference included a two hour NNER training workshop for twenty partnership district administrators and WSU faculty. This session afforded an opportunity to expose those in leadership positions to the mission of NNER encouraging continued commitment to the concepts of “simultaneous renewal” and “democratic engagement.” Ann Foster and Greg Bernhardt, Co-executive Directors of NNER, and James Tomlin, Chair of the WSU Department of Teacher Education, led the session.

A total of 260 professionals attended the conference including teachers, administrators, community organization members, WSU faculty and student teachers. The event was held in Allyn Hall, the home of the College of Education and Human Services, on the WSU campus. The WSUNER Conference committee is very appreciative of the $4000 Setting Renewal Grant awarded by the National Network for Educational Renewal in support of the 2014 event.

The announcement from Council Chair Deb Shanley noted that Wright State had “a significant institutional commitment, a campus capacity to build upon a strong foundation, and a supportive infrastructure.” The National Network for Educational Renewal leads by example as it strives to improve simultaneously the quality of education for thoughtful participation in a democracy and the quality of the preparation of educators. The NNER works through partnerships among P-12 schools, institutions of higher education, and communities.  Wright State has been a proud member of NNER for twenty years, the work of the Wright State University Network for Educational Renewal (WSUNER) has led to fruitful partnerships with local school districts.

GroundSpark Respect for All Project

The Neag School of Education at the University of Connecticut in collaboration with the NNER and GroundSpark, an educational and social justice non-profit that ignites change through film, will offer an exciting opportunity to stakeholders in October. Amy Scharf, Eileen Glaser, and Joel Brown will travel to Connecticut to train grades 4-12 teachers, administrators, teacher education faculty and community organization members using The Respect for All Project (RFAP). RFAP is a national initiative focused on creating inclusive and welcoming school and community environments where young people of all backgrounds and experiences can thrive. René Roselle, from the Neag School of Education is organizing the pilot program.  Look for more on this work at next year’s conference!

The Wyoming setting will hold a session facilitated by Angela Jaime and Kevin Roxas using the Groundspark materials to advance efforts to address issues of equity and safety in schools and teacher education programs.

UTEP hosted the CIRCLE Summer Institute August 1-2, 2013 that promoted research and dialogue on equity and social justice for all learners in K-20 settings. The focus was on underserved communities and included workshops for educators in English and Spanish.

Wright State Partnership will host its second local conference in April 2014 for partnership renewal. The session will include Ohio colleagues from Ohio University and Miami of Ohio as well as members of the Wright State partnership.

Respect for All Institute RFP

NNER is excited to be partnering with GroundSpark, an educational and social justice non-profit that ignites change through film. GroundSpark is the home of The Respect for All Project, a national initiative focused on creating inclusive and welcoming school and community environments where young people of all backgrounds and experiences can thrive. This new collaboration has resulted in a grant that will bring Respect for All materials and facilitators to an NNER setting to pilot a two day workshop on creating a safe and caring environment for all. The link to the  call for proposals is above and it includes contact information if there are questions from those interested in applying. Proposals must be submitted by April 19th to Ann Foster and Greg Bernhardt.

The National Network for Educational Renewal (NNER) leads by example as it strives to improve simultaneously the quality of education for thoughtful participation in a democracy and the quality of the preparation of educators. The NNER works through partnerships among P-12 schools, institutions of higher education, and communities. Four-Part Mission Members of the Network agree on a four-part mission to advance Education in Democracy, which is as follows:

Revised and approved electronically by the NNER Governing Council, February 16, 2007.